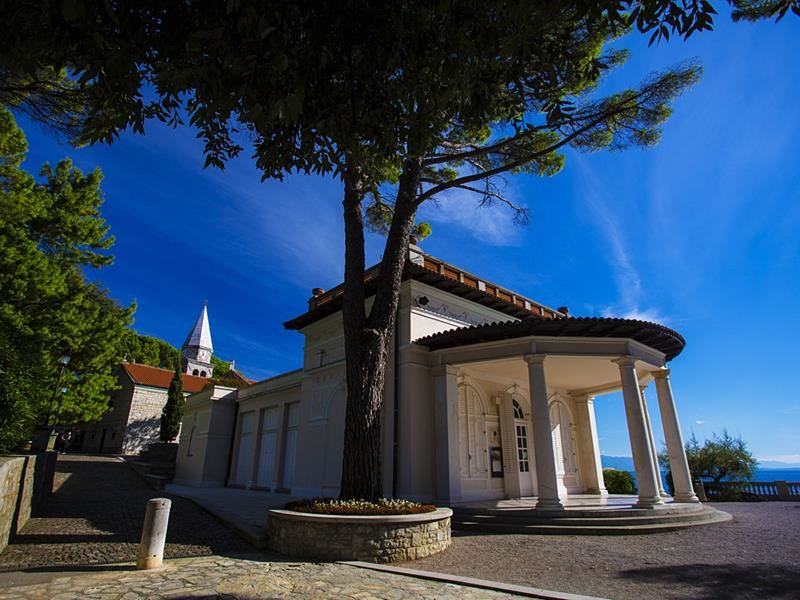 The building that the inhabitants and guests of Opatija today mostly know as a venue for various exhibitions, concerts and theatrical performances, was originally a pastry shop. It was built in 1900 for the Quarnero company of Vienna, and expanded in 1908 following the plan of the Opatija architect Sandor Neuhausler, who added the large terrace facing the seafront promenade. At first, the building hosted the Gerbaud pastry shop, and then the Glacier Pavilion with its café and confectionery. At that time, fresh cakes were supplied daily by train from Vienna and Pest. After 1930, the property became an exhibition pavilion (Padiglione delle esposizioni), and has retained this function up to the present day. After 1945, it was renamed the Juraj Šporer Exhibition Pavilion, and later the Juraj Šporer Arts Pavilion. The building was renovated in 1959, 1964, 1984 and 2003.

The pavilion was named after Juraj Matija Šporer, a physician who played an important role in the promotion of the idea of Opatija as a seaside health resort. After his early retirement in 1851 (until then he had worked in Ljubljana), Šporer moved to Primorje and continued to work as a physician to the Tobacco factory and the Austrian Lloyd in Rijeka and as a private doctor in Veprinac and Kastav. He soon came to the idea of establishing a sanatorium for poor scrofulous patients in Opatija, and in 1872 founded the Commission for the establishment of a balneary and inhalation sanatorium in Opatija with a group of prominent and wealthy citizens of Rijeka. According to its programme and statute, this should have functioned both as a joint-stock company and as a non-profit charitable institution. Although this initiative eventually failed, it nevertheless played an important role in the development of Opatija, and Šporer is today regarded as one of the initiators of the idea of Opatija as a health resort.