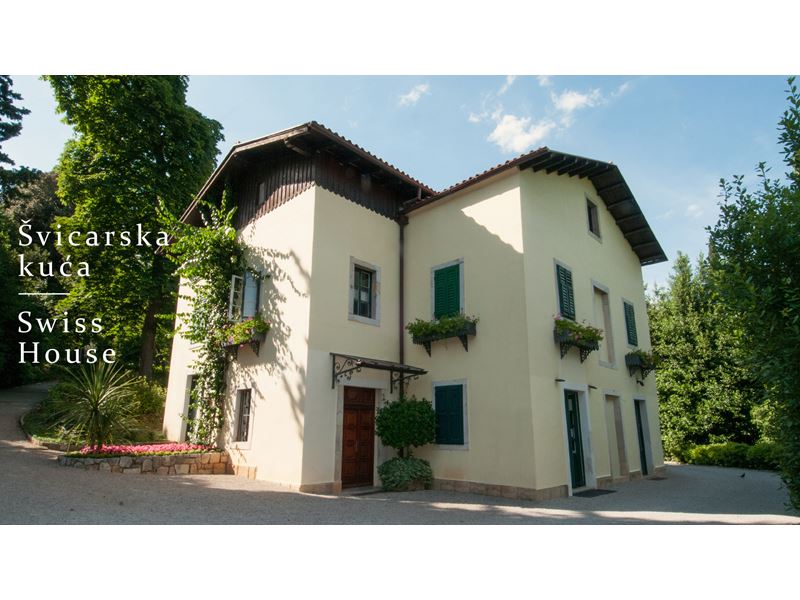 The Girl with the Seagull is not just a sculpture by Zvonko Car from 1956, which over time, thanks to its unique position on a rock above the sea, has become a symbol of Opatija. She is also “your friend” who will take you by the hand and guide you through the newly opened Swiss House (part of the Croatian Museum of Tourism) in Opatija and let you peek into the history of the town and also experience it first-hand from its beginnings right up to the present day. This is what the Swiss House offers today: the story of the history of Opatija from the early days of tourism to the moment when you entered its premises.

At the entrance, you will be welcomed by Opatija’s Golden Guest Book, which will reveal to you the names of the emperors and empresses, dukes and archdukes, kings and governors, famous musicians, writers, doctors, artists and secret lovers who have stayed in the town throughout its history and found refuge in its magical beauty. Just touch the screen and get a quick and interesting insight into times long gone. A document called Gruss aus Abbazia (Greetings from Opatija) will tell you more about the stay of Ban Josip Jelačić in the Villa Angiolina, what the 19th century Act on Bathing Establishments regulated, what one of the first picture postcards from 1898 looked like, what the beach dress code that bathers had to follow was like, what the Steamship Stefania which used to dock in Opatija harbour looked like, and what we know about the visit of the Emperor Franz Joseph to Opatija. It is quite interesting to see from the perspective of today the first tourist guide of Abbazia/Opatija, and to read what the Illustrierte Zeitung wrote about the town in 1894. All this and many more interesting exhibits are waiting for you at the Swiss House, including a large model of the town as it was in the late 19th century.

The images of the Lungomare seafront promenade will accompany you to the second floor, where you can take a rest. In a separate room, there is a bench on which you can sit and watch a 26-minute documentary about the history of Opatija since the early 19th century. Even if you think you know all about the town, there is no doubt that you will learn something new by watching this film. Some parts will probably surprise you, and some will evoke sentimental or romantic feelings about living in a time completely different from our own, a time when ladies wore long dresses, and carried fans and parasols, and the gentlemen were always there to help them.

After that, we take a step forward in time with the sound of a jukebox where you can press a button to hear songs from the Opatija Festival of Popular Music. On the walls, you will see photographs of famous artists and bands, such as Anica Zubović, Vice Vukov, Betty Jurković, Delfini, Višnja Korbar, Rani mraz, Korni grupa, and others. The collection of singles and LPs provides a journey back in time to the golden age of the Opatija Festival. There are also music sheets with songs from the 1966, 1967 and 1968 festivals, and also a list of songs from the Opatija '59 festival, which includes legendary numbers such as Autobus Kalipso (Bus Calypso), Kad se vratiš (When You Come Back), Mirno teku rijeke (Quietly Flow the Rivers) and many more. Here you will also learn that the first disco in Opatija was called Arkade and was opened in 1967. What were the taverns and inns from Volosko to Lovran, what did the advertisement for the Barba Rude ship with its restaurant, bar and café that was moored in Opatija harbour day and night look like, and how is a simple dish known locally as kalandraka prepared? You can find out on the first floor of the Swiss House.

This is a place where past and present are displayed in a way that arouses interest in the history of Opatija, which was first mentioned in 1438, when a group of Benedictine monks from Carinthia arrived in the area. The history continues in the 19th century with the arrival of the Austrian Southern Railway Company and the first train from Vienna, which marked the beginning of Opatija as a health and seaside resort. This blooming period was interrupted by World War One, when all the sanatoria and other health facilities were made available for Austro-Hungarian soldiers to convalesce in. In more recent times, Opatija's hotels had a similar destiny during the war in Croatia in the 1990s.

You can learn all this and much more if you follow the Girl with the Seagull, who will guide you through the new exhibition in the Swiss House, which is now part of the Croatian Museum of Tourism.

The building has an interesting history too. It was first recorded in 1875, when Paulo Scarpa sold it to Count Victor Chorinsky. In 1884, the house became the property of the Austrian Southern Railway Company, was refurbished and named the Schweizerhaus. In the past, it was used to produce fresh dairy products. During the Italian era, the house was turned into a gardener's house and has ever since remained closely connected to the magnificent Angiolina Park. Now it is has been turned into a place that tells the story of Opatija and has opened its door to guests.

The Girl with the Seagull reaches out her hand…